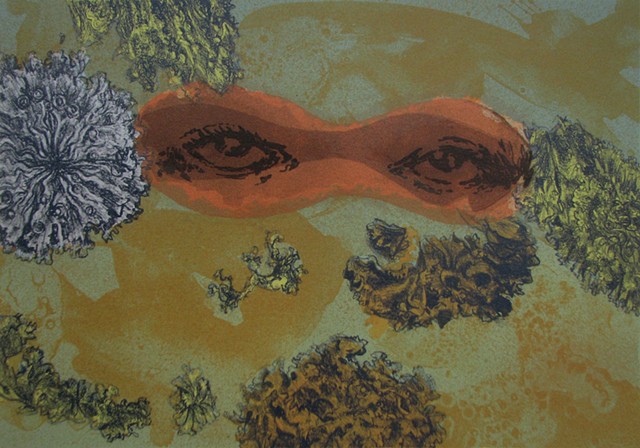 CHRIS MONA I am deeply and equally in love with American pop culture and the natural world. I also love the collisions of the two, and how they reverberate all around us. The layered images that I unleash are at once humorous, quotidian, oddly beautiful, and pleasingly discomforting. I work consistently in painting, printmaking, drawing, and digital media. BIOGRAPHY Chris Mona was born in Washington, DC in 1961, graduating from the University of Virginia with a Bachelor of Arts in 1983, and from Pratt Institute with a Master of Fine Arts in 1985. Mona has received a grant from Artists Space, NY, NY, and two artist’s awards from the Maryland State Arts Council. His work is in public collections, including The Rooms Art Gallery of Newfoundland, St. John’s, Canada; College of Notre Dame, Baltimore, Md; Columbia College, Chicago, Ill; and Franklin Furnace Archive, NY, NY. Mona shows in international, national and regional shows. In 2009 he showed work in Korea and Canada, and in 2010 he had a one person show at Creative Alliance, Baltimore, Md. In 2011, he completed the Aluminum Plate Lithography Workshop at Tamarind Institute, Albuquerque, NM, under the direction of Rodney Hamon. In 2015, Mona was artist-in-residence at Homestead National Monument, Nebraska. Mona is a professor of art at Anne Arundel Community College, Arnold, Md., and also directs its Printmaking Studio.